The Dalesman has been an essential part of life in Yorkshire for eight decades.

Initially called The Yorkshire Dalesman, the magazine was founded in March 1939 by former Leeds journalist Harry J Scott. He ran the magazine from the front room of his home in the small Dales village of Clapham. 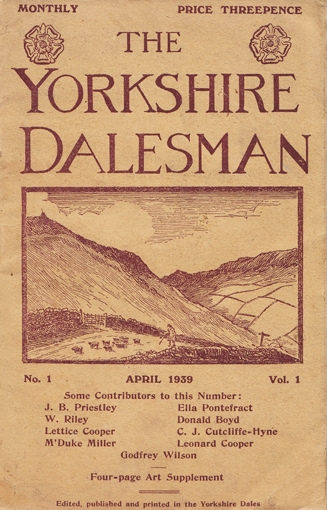 Writing in the first issue, Scott remarked: “Although it may require a word of explanation, the appearance of the first number of a magazine devoted to the Yorkshire Dales needs no apology. The surprising thing is that Dales lovers should have lacked a magazine for so long. It is to serve the interests of this great community that The Yorkshire Dalesman has been founded.

“On this programme, I offer this first number of The Yorkshire Dalesman for your consideration, pleading only for its many shortcomings that no magazine reaches maturity in its first number.”

Also writing in that first edition was playwright JB Priestley. “I am glad to learn that our beloved Dales are to have their own magazine and I wish the venture the success it deserves.” He described his love of Yorkshire’s “high hills and grey-green valleys and lovely peace”, adding: “So please see that your new magazine fights to keep them all unspoilt.”

After eight years of publication, Scott decided to expand the area covered by the magazine to include the whole county of Yorkshire. In March 1947, he wrote: “We have decided that from our next number The Yorkshire Dalesman, while giving no less space each month than in the past to the western dales, shall be enlarged to include all the Yorkshire countryside, the moors and dales of north-east Yorkshire, the hills of Cleveland, the cloughs and valleys of the Yorkshire–Lancashire border, the Plain of York and the high moorlands of Teesdale, no less than the rolling lands of Bowland and the fells and dales of the western Pennines.”

A year later, the magazine’s title was changed to The Dalesman. Scott wrote in March 1948: “It has been a mark of the pleasant friendly bond which has always existed between this magazine and its readers and almost from our first appearance our title was shortened in conversation, in letters and over bookstall counters to The Dalesman. “Has ‘t’ Dalesman’ come yet?” is a familiar phrase in most Yorkshire villages. It would ill become us, therefore, after such friendly treatment, to insist on our full name and title, and we have decided to accept, gratefully, our readers’ choice. From our next issue, which is the first of our tenth year, we shall become simply and plainly THE DALESMAN. This will imply no change in style or policy. It will give us greater scope to look over the Yorkshire border on occasion and hobnob with our neighbours.”

In 1955, The Dalesman finally outgrew Scott’s home, at Fellside, Clapham, and new offices were opened elsewhere in the village.

The second, and perhaps best known, editor was W R (“Bill”) Mitchell, who worked as Scott’s assistant for many years before taking the editor’s chair when his boss retired. Mitchell recalled meeting the “tweed-clad, pipe-smoking” Scott in the offices of the Craven Herald newspaper in Skipton shortly before he joined the magazine. Scott’s unique greeting was “Hail to thee, Blithe Spirit”.

After a long and successful reign as editor, Mitchell was awarded the MBE for his services to journalism in Yorkshire and Cumbria, and he was also admitted by the University of Bradford to the Honorary Degree of Doctor of Letters. He has received the Golden Eagle Award from the Outdoor Writers’ and Photographers’ Guild, which cited him as one of the founding fathers of outdoor writing.

When Mitchell retired in 1988, he was the subject of a Yorkshire Television documentary narrated by playwright Alan Bennett, who concluded the programme by saying: “The Dalesman has proved to be something of a river; it just goes flowing on – and like a river it is, I hope, unstoppable.”

Around the turn of the millennium, The Dalesman moved from Clapham to offices at Broughton Hall, near Skipton.

In 2015, when The Dalesman celebrated its 75th anniversary, BBC One dedicated much of an episode of its flagship Countryfile programme to the magazine and its quest to find the 75 greatest icons of Yorkshire. Among those sending messages of congratulations to the magazine were the Queen and the Duke of York.

The Prime Minister said: “I want to wish The Dalesman huge congratulations on reaching their 75th anniversary. The Dalesman is a Yorkshire icon, and I’d like to wish you all the best for the next 75 years.”

In 2018, a year before marking its 80th anniversary, The Dalesman moved into The Gatehouse of Skipton Castle. The publication continues to flourish and is now part of a stable of five bestselling magazines. It remains independently owned and The Dalesman is still written, edited and printed right here in Yorkshire.

Established in 1939, The Dalesman is Britain’s bestselling regional magazine – and Yorkshire’s favourite!