From the Farm – with Yorkshire Shepherdess Amanda Owen

We welcomed in the last New Year in fine style, outside in the barn calving a cow. 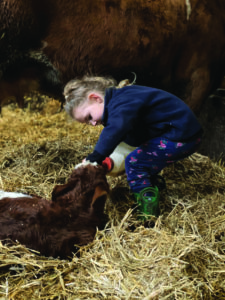 It was a perfectly clear starlit night and freezing hard when Clive and I tottered hand in hand across the farmyard.
Rather than a romantic gesture this was in order that we both remained upright, warmed from within having consumed a generous measure or two of whisky, we gingerly negotiating the icy flagstones in our wellies.
Clive scolded Chalky, our nocturnal terrier whose bright white, unkempt form had appeared out of the darkness, hissing at her to “git away yam”.
The absolute last thing you need when dealing with a cow and particularly one that will soon have a new-born calf is a dog in the vicinity.
We made our way to the barn, Clive’s spare arm outstretched and counterbalanced with a bucket filled with the calving ropes and lube gel.
Sweeping the beam from a flashlight left and right on the lookout for rodents, I caught the green reflections of sheep’s eyes as they nibbled at the hay in the rack that hung from the gate.
In the deeply bedded calving pen at the end of the foddergang one of our older Shorthorn cows stood pensively, staring dead ahead, tail aloft.
Both Clive and myself had rather hoped that she would have gone through the birth process unaided but lady luck was not on our side that night and enough time had elapsed since we had last looked at the mother-to-be for us to know that intervention was now required.
All thoughts of bringing in the New Year beside the fire, listening to the chimes of Big Ben evaporated at roughly the same time that we saw a pair of tiny hooves emerging from the rear end of one of our biggest, best cows.
There was no real reason why the little roan heifer should not have been born naturally, unaided; indeed it was a mystery why she should have arrived earlier than anticipated. She was certainly afore her time.
With a dome-shaped brow, knuckled over hooves due to contracted tendons, she struggled to breathe when finally her wet, slippery inanimate body, newly arrived lay motionless, steaming on the straw in the cold night air. “Is she a wrong un?” Clive muttered as I poked straw up the calf’s nose in an attempt to stimulate breathing, usually a sneeze and a vigorous head shake, both clearing the airways, follows this most rudimentary of awakenings.
Nothing happened in those few seconds. “I dunno,” I said, not relishing the thought of what was to be my next course of action.
Clamping the calf’s muzzle shut with my hand I put my mouth firmly over the calf’s nostrils and blew, quite hard actually, so much so that I saw her chest rise.
Those pivotal moments, probably just seconds, seemed endless, then from the apparent lifelessness a blink.
Then a gasp and that’s it, life kicks in.
“Whisky fumes,” quipped Clive, “Enough to bring anything back from the dead!”
All in all, an hour-and-a-half was spent with the cow and calf, finally coming back inside when we had given the calf its first small feed of colostrum via a bottle.
“Who’d have thought I’d be kissing a cow as the New Year comes in,” I mused as I headed to bed.
“Nowt new to me,” retorted Clive, ever the wit.
We rent a field near Darlington for a few months over winter. On Wednesday I loaded up the trailer and took a handful of our oldest yows there.
They enjoy life in these more temperate climes and are watched over by the field owner who lets us know if there’s anything wrong.
Grazing is in demand at this time of year, for the uninitiated, those that do not have grass chomping quadrupeds, I mean fields of grass.
I remember one day coming into the farmhouse kitchen and seeing Clive on the phone. I mouthed, “Who is it?” he gesticulated at me to be quiet.
“Nah, I’m not hearing yer reet,” he shouted to whoever it was on the other end. “Yer what?” he said, he is a little hard of hearing but whoever was on the other end didn’t give up and chattered away to a nodding Clive.
“Yes, yes, I’m interested,” he said eventually, “I’ll put mi’ wife on, she’ll write yer number down.”
He put his hand over the receiver as he handed it to me.
“Someone with some grazing,” he said smiling.
I took the phone, “Hi there” a voice said, “I hear that you’re wanting some double glazing.”
There’s a first time for anything but being cold called by someone selling grazing was a new one. 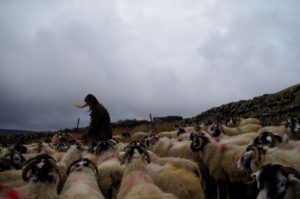