Dalesman Publishing took home a clutch of awards at last night’s O2 Media Awards for Yorkshire and the Humber.

Dalesman and sister magazine Down Your Way picked up four awards at the event, held at Leeds United Football Club.

In a surprise presentation, Dalesman received a special O2 Stand Out award. A video message of congratulations from iconic Yorkshire artist Ashley Jackson was played to the audience.

Meanwhile, Dalesman photographer Stephen Garnett was named Photographer of the Year with his incredible portfolio of images taken for the magazine, including a stunning autumnal rainbow over Aysgarth and a murmuration of starlings in Skipton.

Both Dalesman and Down Your Way were also highly commended in the Community Publication category.

Awards host Louise Minchin from BBC Breakfast, said, “Dalesman celebrated its eightieth year with a new masthead, new award-winning columnists and a catalogue of big interviews with big Yorkshire personalities, including Michael Parkinson, Lesley Garrett and Alan Ayckbourn. It rejoiced in the best of Yorkshire and regularly proved it was the best at doing it.”

She added that judges wanted “to recognise a publication which, from humble beginnings, has grown into a Yorkshire institution”.

“It celebrates the people and the places that make Yorkshire unique,” she said, “and since its launch eighty years ago has attracted some of the most famous writers in the country including JB Priestley, the ‘Bard of Barnsley’ Ian McMillan, and playwright, author and actor Alan Bennett”.

Co-host Dave Massey, from O2, said of Down Your Way, “Quite simply, the panel loved it. One judge said, ‘It makes me feel all fuzzy and warm… what a brilliant publication, especially when it looks as if there’s just one person pulling the content together. Targeted, quality editorial in a mag that knows its audience’.” 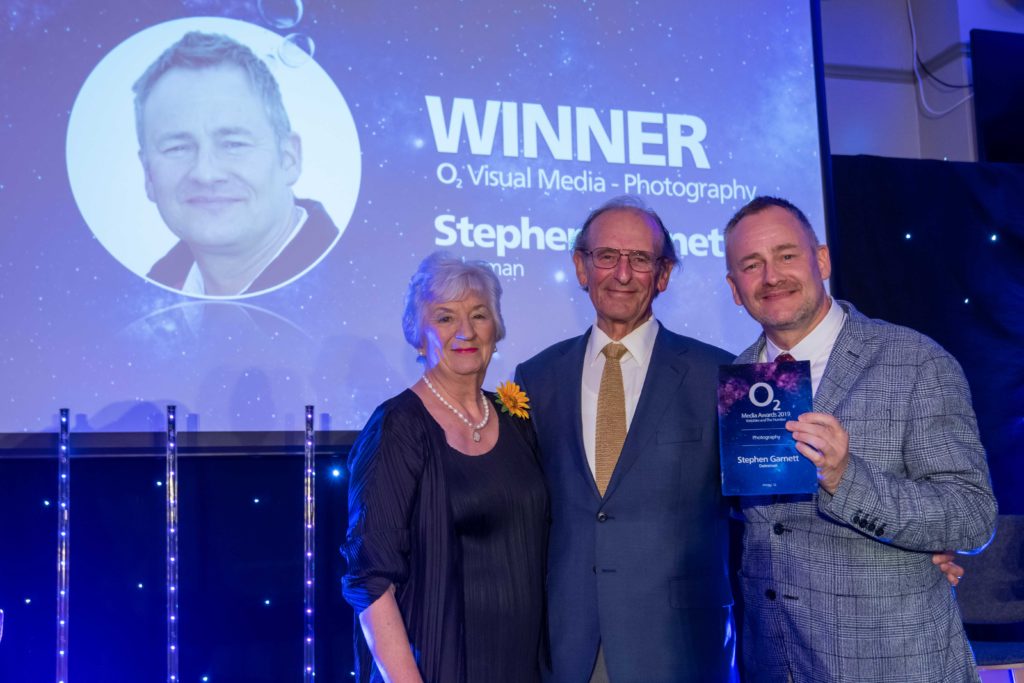 Stephen Garnett received his award from Terry Logan, who photographed the famous Calendar Girls Alternative WI Calendar, along with one of the original “Girls”, his wife Lynda Logan.

Judges “enjoyed the diversity” of Stephen Garnett’s portfolio, highlighting the “technical ability of the photographer and his eye for pictures that made people think.”

Nicola Green, Director of Corporate Affairs at O2, said: “We’ve enjoyed another wonderful year looking back at the positive impact the Yorkshire media has on its communities. It’s clear that the Yorkshire and Humber region has some of the most talented writers, broadcasters and filmmakers in the country.”

Guests at the glittering awards ceremony included Ken Cooke and Ken Smith, two surviving Normandy veterans, who featured in June’s Down Your Way, and Yorkshire sports heroine Eileen Fenton, who entered the record books when she was the first woman to complete the International Cross Channel Swim in 1950.

O2 Media Awards for Yorkshire and The Humber 2019: The winners